When it comes to the design of homes, appearance is everything. Most people tend to find houses with grander designs to be more visually appealing. Fortunately, there are some design “life hacks” to make your house seem more extravagant than it actually is. Using reflection is one of them.

Reflective objects and surfaces has been a popular trend for the past couple of years. They also allow natural light to playfully bounce off of them to create a brighter, momentous room. Because of their reflection, they have the power to make a room look double its size.

This article will be able to provide more information on what is an iridescent tile, what makes them unique, and how to use it as a backsplash.

What is an Iridescent Glass Tile?

According to Walls and Floors UK, an iridescent tile is described as a glass tile that has a main base color. At a different angle or under a different light, however, they can reflect other colors. A great example of iridescence are the colors of a soap bubble.

They have the power to turn a room from boring to magnificent. Because of their bright appearance, it is recommended that you use the tiles sparingly as accents or a border for interior designs in kitchens and bathrooms.

Glass tiles were first crafted during the Byzantine Empire. It was used to decorate surfaces, such as walls and ceilings. These tiles are referred to as “smalti”. These glass tiles were expensive to have, leaving only churches, public buildings, and properties of the rich to be accessorized with mosaics made of them.

Glass tiles continued being exclusively only for the upper class until the Victorian Age. Thanks to the development of technology, people were able to produce more glass tiles at a faster rate. Not only was its cost made affordable, but the quality of the materials became more consistent.

In the early 20 th century, there was a big artistic movement called Art Nouveau. Louis Comfort Tiffany, an American artist and designer, greatly influenced the use of glass in interior design. A majority of his designs were inspired by nature. Numerous people, like Cornelius Vanderbilt and Mark Twain, were fans of his work.

The interest of glass tiles gradually decreased over time until people discovered how resourceful they are. In 1992, glass tile companies started to recycle old glass to make tiles.

Because of their luxurious details and radiance, even celebrities (such as Cameron Diaz and Ellen Degeneres) have invested in having iridescent glass tiles.

What Makes Them Unique?

Although mirrors are commonly used as a reflective accent, you can choose to use iridescent tiles as a more luxurious option. These colorful tiles are rising in popularity due its unique style.

Compared to the other tiles on the market, iridescent tiles are the most modern backsplash material you can find. Not only are they nice to look at, but they have zero percent of water absorption.

Because water splashes tend to leave behind residue, you can spritz on all purpose cleaner. If you don’t have that, you can give it a quick rinse with warm, soapy water.

Iridescent glass tiles are environmentally friendly in comparison to other materials. This is because a majority of these tiles are made from recycled material. Even if they aren’t, you can opt to recycle once you’ve chosen to retire them. They also take less energy to make than most tiles.

The tiles come in a variety of sizes. You can choose from smaller mosaic tiles to larger decor pieces. If you desire to have any pieces reshaped, you can bring them to a manufacturer. Through this, you are given more creative freedom.

These glass tiles can easily boost the look of a room. You won’t have to worry about whether it matches the style as they come in almost every color. Their iridescent finish should enhance whatever color you choose.

One home project you could do to significantly increase your home’s value is to use the iridescent tiles as a backsplash in any room. This is great for making older homes have a modern twist.

Because of their various benefits, it is understandable that these tiles are more costly in comparison to other tiles. According to Remodeling Expense, the average cost per square foot ranges from $34.75 to $46.60, whereas installation usually costs around $400.

Although the tiles are expensive, you won’t have to worry too much since they were made to be an accent to the room. Considering the quality that iridescent tiles have, you can think of them as an investment for your house.

Because the tiles come in various colors and shapes, they are versatile enough to use in almost any room. However, they are more commonly used in kitchens, bathrooms, and swimming pools. Here are some styling tips you can incorporate into your home:

How to Style in Kitchen

Your kitchen is considered the heart of the house. Not only is it a place to prepare meals, but a room that was meant to create wholesome memories in. You can make the room even more memorable with a touch of iridescent tiles.

The kitchen is a usual hot spot at parties, where people tend to have their conversations away from the noise or where they can grab some snacks. Regardless, you can be sure that iridescent tiles bring more life to the room.

Most iridescent tiles are used as a kitchen backsplash, meaning the panels behind a stove or sink. Although it may seem like these tiles are made for decoration purposes, they function as the wall’s protective barrier from splashes. Though some oil or water may go on the walls, they can be easily cleaned. 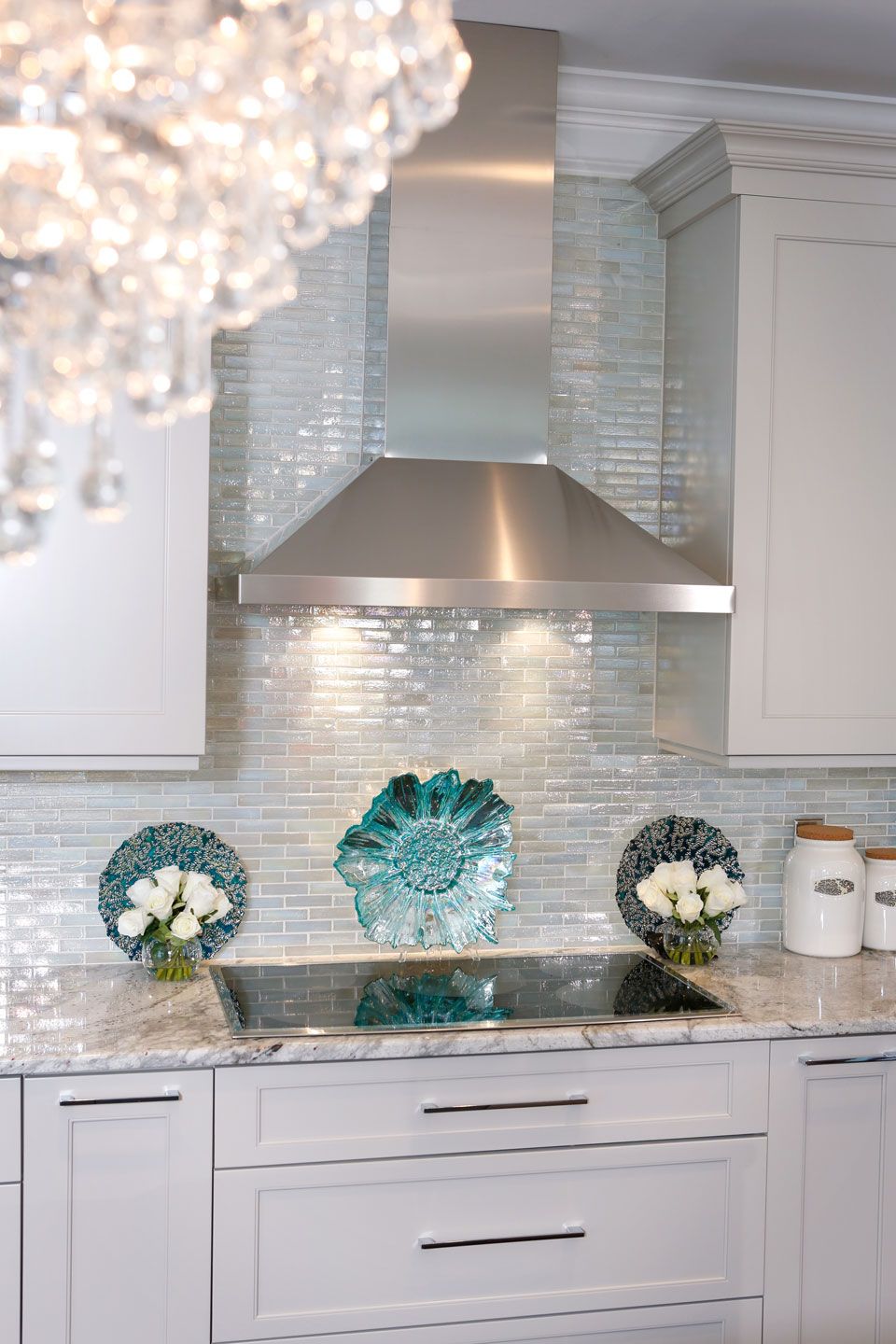 How to Style in Bathroom

You should also realize that bathrooms will be used by almost anyone who enters your home. Visitors have a natural tendency to judge the cleanliness and appearance of a house through their bathrooms. This is why most people don’t tend to hold back on their decorating skills.

Because bathrooms generally have smaller windows, you can use iridescent tiles to enhance the lighting. You can place the tiles behind the sink or in the shower since these are the places where water may splash. 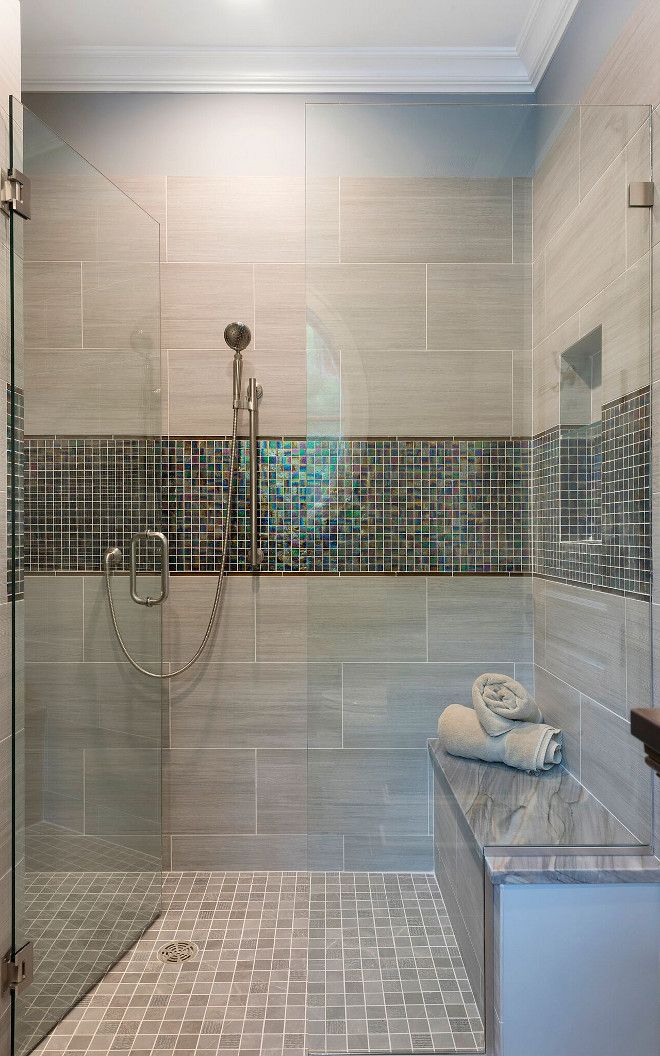 How to Style in Backyard

Before the summer season comes around, you can opt to give your pool a subtle makeover with iridescent tiles. Because the pool is outside, there is plenty of sunlight to bounce off the tiles. It makes the water look even more magical, especially if you choose mosaic pool tiles.

Pool mosaic tiles can easily match with almost any materials that your pool may have, such as ceramic, wood, and stone.

Common problems with choosing pool tiles is finding tiles that are durable enough to withstand chemicals. Additionally, these tiles are incapable of absorbing water. That way, you won’t have to worry about dealing with mold and mildew. Cleaning is made easier as you can simply mop the tiles with warm water. 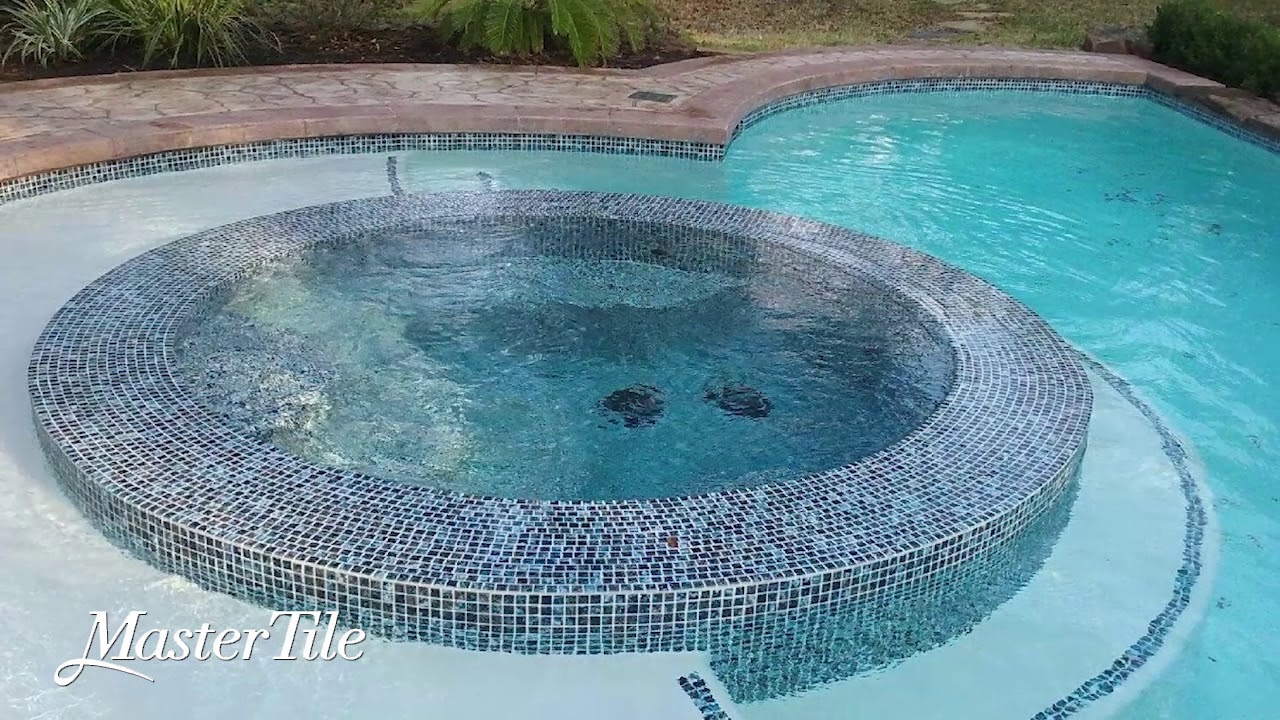 As stated earlier, iridescent tiles are available in almost any color. However, the following are some of the most popular colors that you can find at your local tile store.

To maintain an elegant and traditional atmosphere, you can use white iridescent tiles. It is the most popular style of iridescent tile. This timeless color of tiles are great to use as a backsplash in the kitchen, or as an accent in your bathroom. White is a versatile color to use in any household, especially in minimalist, bohemian, and modern styled houses.

Popularly used in pools, blue helps to emphasize the pigment of the water. Having iridescent tiles in this color also has the psychological power to make people feel calmer while around the pool. 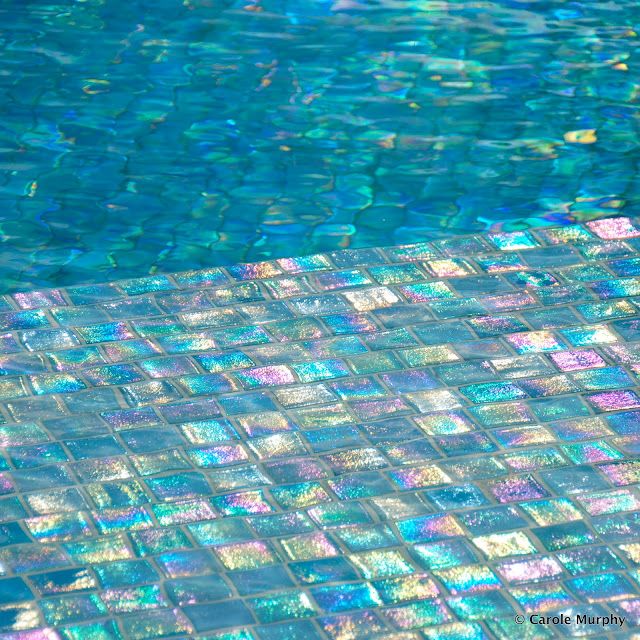 Green is commonly used to create a more natural feel. It is most commonly combined with blue tiles in outdoor pools. 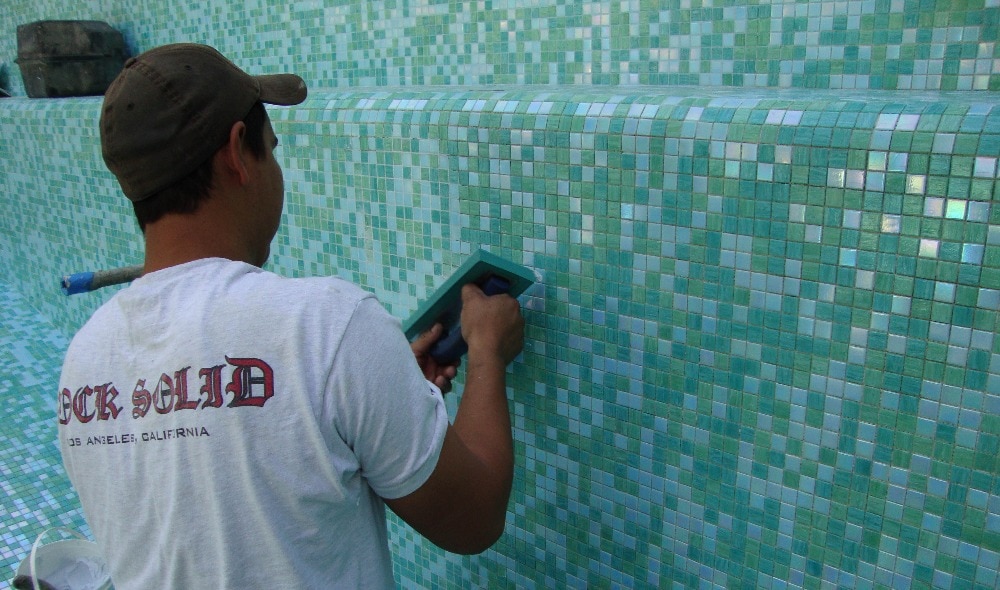 Because it is such a dark color, black tends to display the iridescent finish more than any other color. The colorful appearance transforms the “depressing” color into an elegant one.

Since black is such a dominant color, you can use it to add emphasis to a part of the room. It is also great for a backsplash in the kitchen since it can easily disguise any oil stains from cooking. 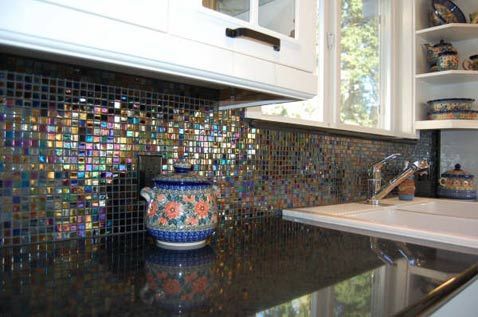 Although some houses aren’t brave enough to sport this strong color, pink iridescent tiles can provide a more feminine feel to the room. People who purchase tiles of this color often use them in their master bathrooms, since they are naturally given more freedom to design their personal bathroom.

Like any home project, you should always plan beforehand to prevent any potential inconveniences. Here are some things to consider:

1.Where will the tiles be placed?

Determine where you would want to place the tiles. You will need to take measurements to estimate the tiles you would need.

Color schemes heavily influence the style of a room. Although choosing between colors may be difficult, hopefully the previous section of this article helps you determine which color you should go for.

It is recommended that smaller spaces use light colored tiles to give the illusion of having more light and space. Darker colors can make the room feel cozier, but should only be purchased if the room has enough light to balance it out.

Iridescent tiles don’t only display many colors, but also come in many shapes. From basic shapes as squares and rectangles to unique shapes like honeycomb and mosaic, your local tile company can provide you with many styles.

The most common style of iridescent tiles are 4” x 4” square tiles. However, you shouldn’t let this affect your designing ideas. If you prefer a different style, you can always ask if they are able to reshape them for you.

4.How Much Do You Plan on Spending?

Iridescent tiles make beautiful additions to the house, but they come at a rather valuable price. If you have a limited budget, consider covering a smaller section of the room. You should also keep in mind that more complex designs are likely to be more expensive than those that are simple.

Every home owner desires to live in a well-designed house. There is no better feeling than receiving a compliment about how beautiful your home looks. Iridescent tiles are capable of capturing anyone’s eye, especially with the right amount of lighting.

Overall, installing glass iridescent tiles may seem like a small home project but they can help a boring room reach its full potential. With an abundance of colors and designs, you can ensure your designing skills won’t be limited.

Before purchasing tiles, you should consider where you would like to place them. These tiles are commonly placed in (but not limited to) bathrooms, kitchens, and swimming pools. Choose a tile color that best compliments the color scheme of the room. Grout colors are also important as they are able to minimize or emphasize the tiles’ appearance.

Although glass tiles have been used since ancient times, they have recently started to rise in popularity. Household name celebrities, such as Ellen Degeneres and Cameron Diaz, have also incorporated iridescent tiles into their households.

However, iridescent tiles shouldn’t be considered as just another temporary household trend. Their vibrance and uniqueness make them a timeless feature that could significantly increase the value of your home. 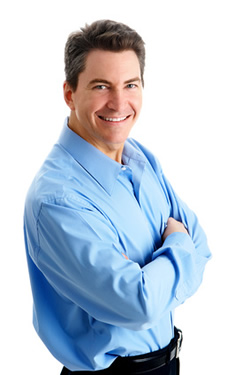 Bio: A graduate of Ohio State University with an MBA in Business, Mike Belk has been in the tile and stone industry for over 20 years. Mike is the owner and founder of Belk Tile. He has become one of premier tile experts in the nation. Not only does Mike love every aspect of his job, he strives ensure your experience is the very best. He runs a successful blog and, when not immersed in the world of tile, is an avid golfer and wine maker. Mike enjoys interacting with customers and wants to hear from you today. Make sure to check out his podcast of Tile Talk by Mike Belk.